When I watched Daddy and Daisy laying on the floor, singing and playing Sleeping Bunnies I then realised that I haven’t written much about some of the more physical play we’ve been doing together.

Sleeping Bunnies came after we’d been playing together with a soft ball. I put the empty laundry baskets on their side and showed Daisy how to roll the balls into the baskets.

Daisy decided she preferred to play with the larger soft ball which was rolling across the floor. She dashed after the ball, stopped and seemed to try to kick the ball as she was stepping forward. She squatted down and picked up the ball then dropped it and chased after it again, and again, as it rolled around on the floor.

One happy little girl who was discovering how to move and follow a ball, find her balance, squat down, keep her balance, pick up a ball, hold a ball in two hands, stand up and carry a ball. And all of this was much more fun than my idea of rolling balls into the laundry basket!

This indoor ball play could be repeated outside. Daisy seemed to be developing good balance skills but on uneven ground and grassy areas outside, initially she might find it harder to keep her balance to be able to kick the ball. To help her confidence, a parent or grandparent could knee behind/ beside her and gently support her around the waist while she tries to kick. 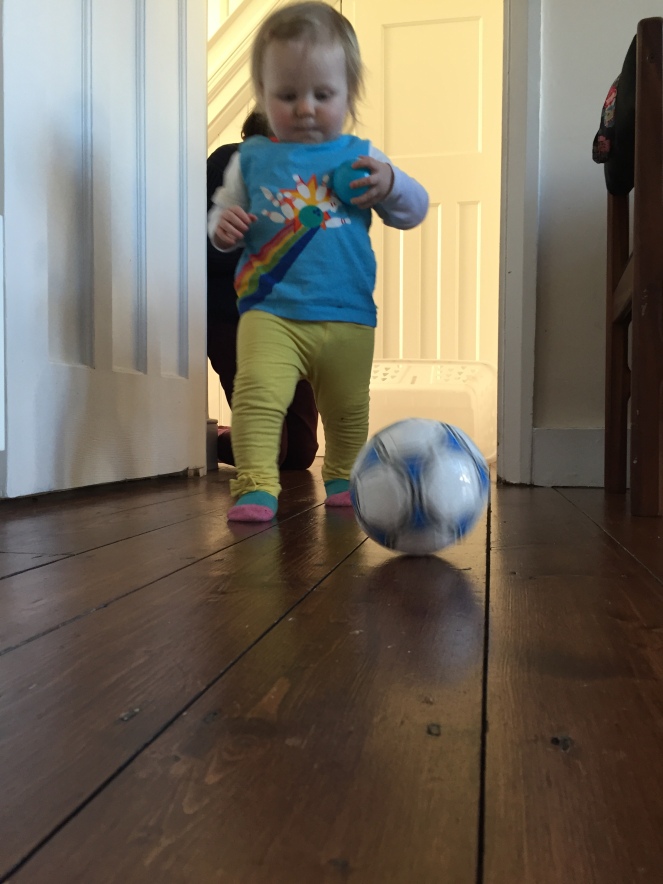