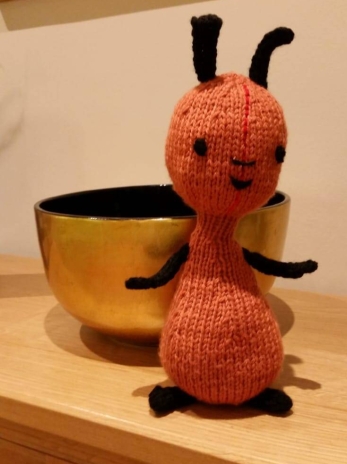 I’d discovered a knitting pattern for Flop on the CBeebies Grown-Ups site and packed pattern, yarn and knitting needles.

The pattern is easy to follow but there’s no yarn details or knitting needles size included in the instructions.  Flop can be knitted in any thickness of yarn, using the correct knitting needles for the selected yarn (suggested on the yarn band).  The finer (thinner) that the yarn is the smaller Flop is when completed.

I did test pieces before I started and preferred the effect of knitting two strands of double knitting yarn together and knitting using 4.5mm (UK size 7) knitting needles.

On holiday I managed to knit Flop and his ears, arms and feet.  But I didn’t construct Flop until we were home from holiday carefully stitching together and stuffing to create the shape of Flop.  I also looking at illustrations of Flop online and in Bing books so that I could work out where to attach Flop’s ears, feet and arms.  Not forgetting the embroidered red line of stitching on his body and head.  Embroidering his facial features was the most challenging bit.

My version of Flop seems to be a success.  As soon as Daisy spotted Flop on my suitcase she giggled ‘Flop’, took Flop by an arm and toddled off with him. 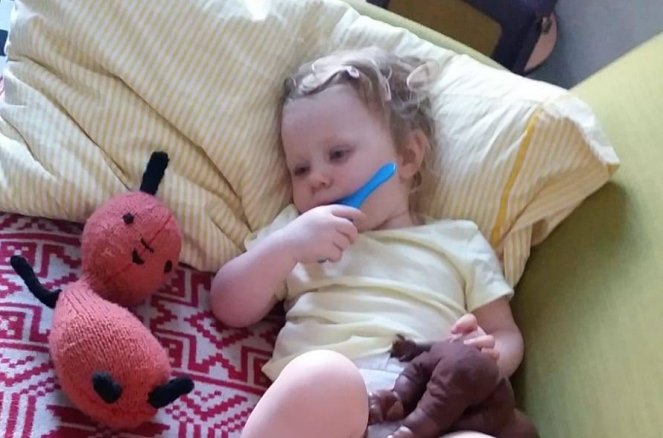 Flop isn’t difficult to knit.  He’s a bit fiddly to construct but he’s worth it to give your grandchild a lovely homemade cuddly toy that they know of through CBeebies tv programmes, books and even in Bing magazines.