During my recent stay with Daisy we had plenty of messy play time, using the latest addition to her play area. Daisy now has a large blue plastic tray for her messy play. Daisy really enjoys messy pay so this tray is in use most days and she’s been enjoying all different types of messy play.

These large octagonal heavy duty multi-purpose plastic trays are readily available online and it’s also possible to buy black versions at stores such as Wickes and B & Q where they are sold as builder’s cement/concrete mixing trays. They’re almost a metre wide so they’re an ideal size for play and they’re also ideal for setting up messy play at home as they have a messy play containing raised rim.

I know that some grandparents as well as parents will feel uncertain about messy play at home. Messy play is a wonderful sensory experience for babies, toddlers and young children. It also gives them important experiences that help them to develop their hand and eye control. to develop their muscles and movements and as we talk to them during their messy play we help to develop their language.

Messy play gives them an opportunity to investigate the world around them in a safe way and gradually they can learn about using ‘tools’/equipment. One of the best ways for them to work out how to use different crockery and cutlery is through this kind of play. By experimenting they can develop so many useful skills such as how to lift a bowl containing a mixture or that things fall off a spoon if it is turned upside down. When they find that they can do some of these tasks they become more confident in their play as well as being more independent.

Apart from needing something like the builder’s tray, messy play can be easily set up using items that most grandparents and parents have at home, in the kitchen. Messy play with food is ideal, especially if your grandchild is still tempted to put everything in their mouth.

Here are some photos of Daisy’s messy play using food. 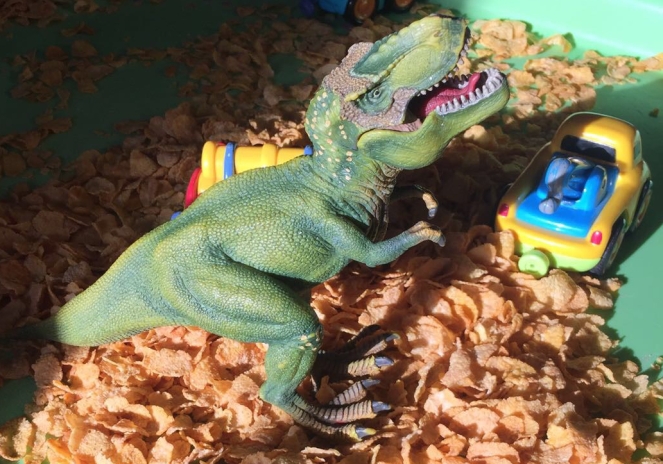 Daisy has had a large bowl of cornflakes spread on her tray and mixed in with some of her small vehicles and small animals hidden in the cereal. And Daisy also enjoyed swishing her hands through the cereal, to make a noise while enjoying the sensation of touching the cereal. (At the end of her play we did bag up the cereal, ready for another day’s play.) 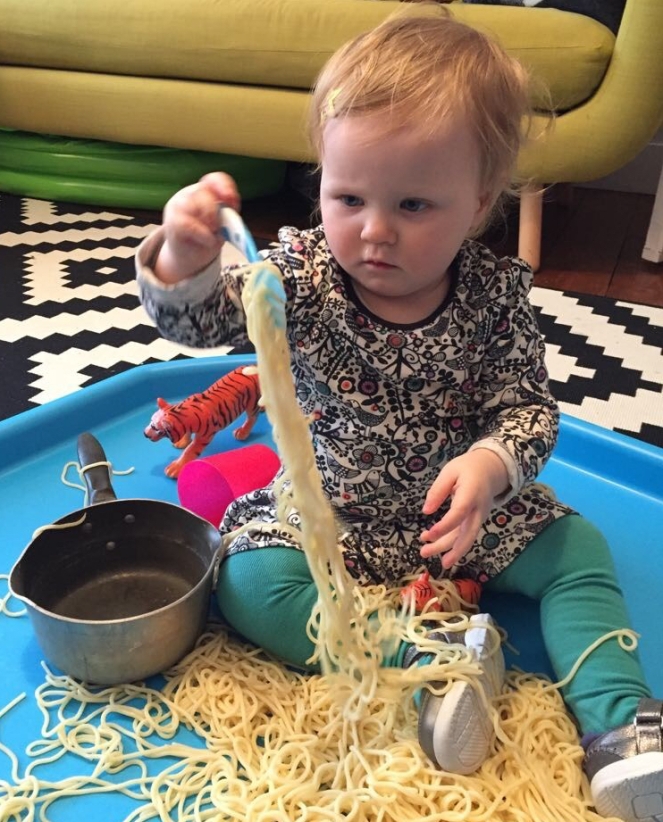 I missed the day that Daisy had some jelly on the messy play tray and investigated that with bowls, spoons and her feet as well as her hands.

Daisy’s messy play seems to engage her for quite a long while, which is a bonus for any busy grandparent.

For more ideas take a look at Helen Bromley’s excellent book 50 Exciting Ways to use a Builder’s Tray by Lawrence Educational and available from http://www.yellow-door.net. By the way you’ll find so many other lovely things behind the Yellow Door!

*NEW BLOG* From exhilarating sports to interesting flag designs, this year’s Summer Olympics in Tokyo can offer young children a unique glimpse at the diverse world beyond their national borders. In my latest post I look at some simple activities that can help support their discoveries
*NEW BLOG* Sharing a book with your preschool child is a wonderful way to encourage a love of reading, but don’t overlook the value of re-reading! Reexamining a book helps a child to uncover nuances and surprises in the illustrations, empathise with different characters and think about the wider implications of a story. In my latest post I share my observations about how you can get the most of your shared reading experience together…
*NEW BLOG* Number bonds are pairs of numbers that preschool children can recognise for quick addition: we all know how many toes we have without adding them up! In my latest post I explain how to introduce number bonds and numerical patterns to your child (with a little help from the Numberblocks, of course!)
Thank you to @learnwell_education for my complementary copy of Alphabet Rhyme Time by @phonicfairy and @becbarnes72
*NEW BLOG* There are so many unseen benefits to a colouring book, beyond giving parents a break! Among preschoolers, regular colouring helps to promote concentration, as well good pencil grip and control. As I explain in my latest blog, when shared with an adult colouring is also a great opportunity to talk, develop language and simply enjoy some relaxing time together.
*NEW BLOG* The signs of spring are everywhere. It’s a great time for preschool children to learn about seasonal change and early life cycles, and daffodils are the perfect place to start, as I explain in my latest post...
Loading Comments...
%d bloggers like this:
%d bloggers like this: